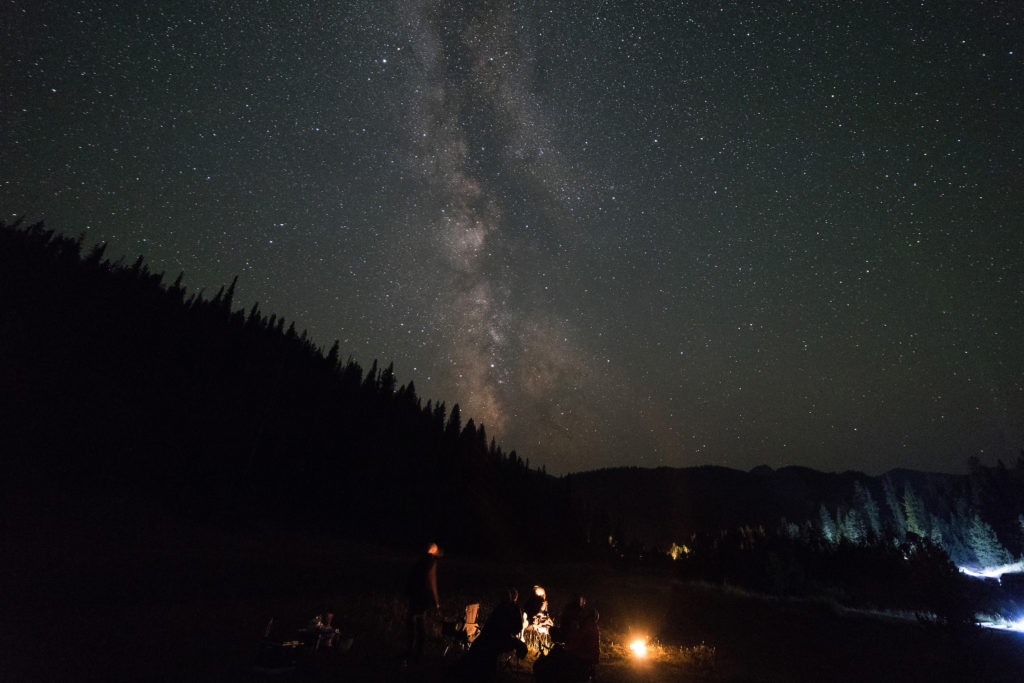 12 Nov Are You Ready To Travel Long Distance With An Electric Vehicle? With The Chevy Bolt EV You Can – Rob Marcroft Photo

Amigas, this summer I was invited to explore America’s first gold-tier international dark sky reserve, which is one of only 12 in the world. The reserve was recently accredited just a few months ago, so with the perseid meteor shower coming through this summer, it was expected to be a special experience.

During this journey, I had a chance to drive a Chevrolet Bolt EV where I had an opportunity to get hands on time with a leading all-electric vehicle that can go 238 miles on one charge. It was really a perfect fit for this environmentally mindful destination, since Ketchum is preserved for the quality of their dark skies. The destination was less than 3 hours from Boise to Sun Valley, which is 151 miles, giving us plenty of range to enjoy the fully charged Bolt EV’s capabilities.

How to Charge Bolt EV

As we started our journey from Boise to Ketchum a few concerns and thoughts came to mind, as it does with many of us when we think of electric vehicles. My first question was, how accessible are charging stations in case you need to charge up? Before we took off, we mapped out charging stations in Boise and we were surprised to find over 6 ChargePoint charging stations nearby. In fact, the airport had them as well, which are free to use. For the most part, depending where you live, there are charging stations appearing in your neighborhood. Its more common than you realize, especially if you live in Southern California. We know the struggle of commuting is real in Los Angeles. Even employers are installing charge stations at work so more commuters can benefit from having an electric vehicle, free of charge. In fact, the average commuter commutes about 40 miles each way, so if you own a Bolt EV, you would be fully charged by the next working day. You would’t necessarily have to worry about being stranded unless you forget to charge your car when you get home.

My second question would be, how long would it take to get a full charge? If you plug-in your vehicle to a 7.2 kW onboard charger for regular overnight charging from a 240-V wall box (which is standard) it would take 9.3 hours. A 240-V wall is standard and most people have them in their garage where they would plug in their washer/dryer. If you use a SAE Combo DC Fast Charge, you could get up to 90 miles in 30 minutes. If you charge at a station, as I mentioned – some places are free like Volta Charging, but if you come across a location where they charge, depending on location, it could run range from $0.39 to $0.79 per kWh.

Knowing that our concern regarding running out of battery wasn’t going to be a problem, we were confident to take on the road and learn more about the Bolt Ev’s features. One of the first features that we noticed right away was its 10.2″ color touch screen allowing you to connect both Apple CarPlay or Android Auto. With Apple CarPlay you would have access to certain iOS features while driving, which would display them on the touchscreen, such as making calls, send/receive messages and listen to your favorite playlists. With Android Auto built around Google Maps, it gives you the ability to talk to Google and use several different apps straight from your cars display screen. Plus, as expected with most tech friendly vehicles, the vehicle featured the OnStar 4G LTE with Wi-Fi hotspot (three-month/3GB data trial). Which is perfect, because as a passenger, I was able to access the hotspot to get a little work done as we drove for 2.5 hours to Ketchum.

The next feature that played with my mind was its innovative rearview mirror. This was a rearview mirror from the future. The Bolt EV’s newest mirror projects a wide-angle view of the area behind the vehicle in the inside rearview mirror. The mirror surface doubles as a video screen and provides the driver with a full, high-resolution view, without the obstruction of rear head restraints or rear-seat passengers. Because we all have that one person who sits in the middle seat and we have to ask them to move their head to a side. I do have to admit, at first it was hard getting used to, but after a while it was as if we were always meant to have a flawless mirror. I did however found it hard to use at night. The good thing is that you could always adjust it back to a classic rearview mirror. Just keep that in mind, our mirrors one day will all be digital in the future. Imagine that?

Still not impressed with the Bolt’s digital mirror or its large touch screen? Well its connected center console is guaranteed to impress any geek who always has the latest in smartphone technology. The Bolt EV engineers designed a wireless phone charging station with a compartment large enough to even place a tablet. How many times have you forgotten your smartphone charging cord at home or at the office? Well this wireless wonder is guaranteed to always have your smartphone at 100%. But do keep this in mind, the more you connect your devices or have apps running, the more energy gets used. For those who don’t have the latest and the greatest in smartphone devices, not to worry, there’s standard USB connectors for your charging cables too.

Yes, you read that right. The Chevy Bolt EV allows you to drive and break, all in one pedal. This was another feature that was hard to get used to at first. But we quickly got used to it and loved it. Its perfect for those who commute and are constantly stuck in traffic with it’s stop and go. Once again, I am talking to you Angelinos. Check this out, when driving in Low mode at any speed, you can slow down – or even come to a complete stop – by simply lifting your foot off the accelerator. This allows you to use your brakes less, which means less energy is wasted, and in turn helps to increase your range. One Pedal Driving and deceleration features may be limited when the battery is near full charge or cold. Of course, you should always use your brake pedal if you need to stop quickly. Which your natural instincts would just kick-in when you need to.

Now this next feature I’m going to share with you is for those who hate parallel parking. The Bolt EV’s Surround Vision Camera features a technology that provides a literal look of the vehicle from the top. This available system uses strategically located cameras on all sides of the vehicle to provide a 360-degree bird’s-eye view of the vehicle, which helps drivers quickly view the surrounding area at a glance for more confident maneuvering when reversing, parking or trailering. Tell me that’s now awesome. This is something I can get used to, especially when I have to drive out to meetings in areas that have tight parking spots. Another favorite feature we discovered as we kept on driving and testing.

After our long discovery drive from Boise to Ketchum, we finally arrived at the hotel where they offered a charging station. After a 2.5 hour drive, with 68 miles left to go, we left the vehicle to charge up while we went to check-in, get ready and have dinner in town. We finished dinner on time to drive out to Sun Valley’s Dark Sky Reserve to gaze at stars and watch the perseid meteor shower and milky way with local dark sky expert, Stephen Pauley (“Dr. Dark”).

I’ve never seen such clear skies and bright stars. Actually majority of the population on earth never does, according to Dr. Dark, 80% of the world will never see true skies or even a meteor shower due to so much light population.

Experiencing the Perseid meteor shower was truly a memorable experience for me, especially since the meteor shower only comes around every summer when Earth passes through the trail of dust and debris left in the orbit of a very large Comet. I probably will never have another opportunity to see this many shooting stars unless I find myself traveling to another dark sky reserve or come back to Sun Valley, Idaho. With so much light pollution and other types of pollution in our cities, chances are you won’t either. After experiencing this magical wonder it made me think, what can we do to minimize so much toxic in our beautiful skies? I know it would take more than owning an electric vehicle to make a difference, but imagine if we all did. We could bring back one star at a time.

So am I ready to travel long distance with an electric vehicle? I can say with total confidence, yes, I am ready. I’m no longer intimidated to own an electric vehicle. After this experience, I can see how the Bolt EV can now become my everyday car.

Fun Facts About the Bolt EV