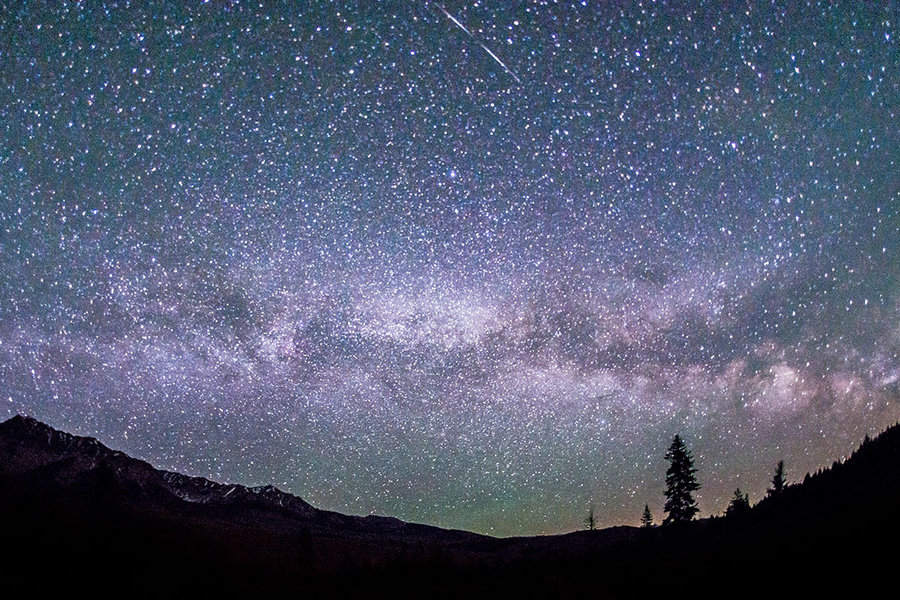 WHY WE WROTE THIS

Illumination has come to signify societal progress. But some communities are starting to find new value in darkness. On this darkest night of the year, our reporter reflects on a quest to find true darkness – and to restore her connection to the cosmos.

At 5 a.m., it’s too dark to see the fields of volcanic rock and sagebrush that stretch for miles on either side of the highway. But over the beams of my headlights, I get a taste of the view I’m really here for, as a few stars pierce the inky black sky.

Today, our relationship to the cosmos is largely mediated by technology, through telescopes and NASA missions. But for millennia, humans could simply look up on a clear night to marvel at the bright speckles that stretched directly over them. Pondering space was a visceral experience.

But over time, we’ve distanced ourselves from our stellar context, building a veil of artificial light between ourselves and the dark depths of space. Our streetlights, neon signs, and other electric lights are increasingly flooding the night sky and overpowering the stars. As a result, about a third of the world’s population cannot see the Milky Way from where they live. And some people can’t even recognize it. In 1994, when an earthquake knocked out power across Los Angeles in the night, some residents were reportedly so alarmed by the unfamiliar silvery cloud overhead that they called 911.

Still, some people say that a natural connection to the cosmos is worth maintaining. And that means embracing the darkness, and fighting to preserve it.

“The sense of wonder for the night sky is disappearing,” says Steve Pauley, who has earned the nickname “Dr. Dark” for his work on preventing light pollution in Idaho. And that means something vital to humanity is being lost, he says. “What are we without wonder?”

That’s why I’ve dragged myself out of bed hours before sunrise. Like 99 percent of Americans, I live with light pollution, and I’ve never seen a truly naked night sky. So I’m searching for my first glimpse.

With vast public lands and a smattering of small towns, it gets pretty dark at night in central Idaho – arguably one of the darkest places in the country. Just last year, in the wake of local efforts to minimize light pollution, the International Dark-Sky Association (IDA) certified a swath of more than 1,400 square miles there as the first International Dark-Sky Reserve in the United States.

Efforts to preserve the darkness in the region began about 20 years ago, when Dr. Pauley, a retired medical doctor and resident of Ketchum, Idaho, noticed the sky overhead was getting brighter at night. “I thought, ‘This is not good,’ ” he recalls.

After researching light pollution, writing a newspaper column, and giving public talks on the topic, Pauley began to catch the attention of city officials. Together, they instituted “dark sky ordinances,” requiring and encouraging residents to eliminate excess lighting in their yards and businesses and to shield light so it illuminates only the intended area. The town has also been certified as a dark sky community by the IDA.

About 60 miles north of Ketchum, another Idahoan became enamored with the night sky.

“It seemed to me like one of the real amenities of living in a place like this,” says Steve Botti, mayor of Stanley, Idaho. So when he learned about the IDA’s efforts to designate dark sky reserves, he realized the region was a perfect candidate.

Mr. Botti collaborated with officials in Ketchum, the city of Sun Valley, Blaine County, the Idaho Conservation League, and the US Forest Service to submit an application to the IDA for reserve status. In December 2017, the IDA approved the application and awarded the Central Idaho Dark Sky Reserve with Gold Tier status, the highest ranking for night sky quality.

It makes sense that rural Idaho can get so dark, as light pollution is inherently tied to urban living. But that doesn’t mean we should treat cities as completely lost causes, says Diane Turnshek, an astronomer and lecturer at Carnegie Mellon University in Pittsburgh.

“There’s going to be a lingering place in the [city] center where you’re never going to see [the Milky Way],” she says. “But I think more in terms of how far you have to travel outside the city to see the Milky Way. If you could bring it down from an hour to 20 minutes’ drive, that would be awesome. Many more people would see the Milky Way then.”

Professor Turnshek has spearheaded efforts to reduce light pollution in Pittsburgh. There, and in other cities, like Tucson, Ariz., dark sky activists have convinced officials to switch out traditional incandescent bulbs in streetlights for ones with less glare, like yellow-hued LED bulbs.

Untangling humanity completely from light pollution isn’t really the goal, says John Barentine, director of public policy at the IDA. Artificial light often goes hand in hand with human technological advancement and can provide benefits to society, such as in the form of greenhouses or safety at night. But there may be a happy medium, says Dr. Barentine, such as motion-sensor lights or dimmable bulbs.

Proponents of darkness say it’s worth finding a way to reduce artificial light where we can. Recent studies have found many ways that light pollution damages animals’ natural rhythms, from sea turtle hatchlings to migratory birds, and influences human health.

“But I think we should [reduce light pollution] for its own sake and for how it can improve our overall feeling about ourselves and our world,” Barentine says. “The night sky is something that inspires people. It has for thousands of years.”

My own quest for a glimpse of true darkness reveals a disconnect between myself and the circadian rhythms of Earth. By the time I reach a deserted parking lot in Ketchum, the sky has already begun to brighten, and twilight blots out most of the Milky Way. Having never known the true meaning of dawn, I had made a crucial miscalculation. Speaking only to the frosted grasses and mountains around me, I vow aloud to try again as soon as possible.

Two days later, the sky is clear enough for another try.

As I step out of the car, I nervously raise my face up toward the sky. Jackpot! There it is, stretching across the sky as far as I can see. The Milky Way is so vibrant, my eyes don’t even have to adjust to the dark to see it.

I expected to feel a depth to the sky, perhaps as though I was falling into a bottomless pit. Instead, the blanket of stars above me is so thick it is hard to fathom that what lies before me are billions of entire solar systems. In black and white, the whole scene feels surreal.

As I get back in the car, I mentally plan to return, to spend a night beneath these stars so I can marinate in the vastness of the cosmos and my small place within it.

As if my thoughts had been heard, back on the highway I pass a sign that says “Never Stop Looking Up.”