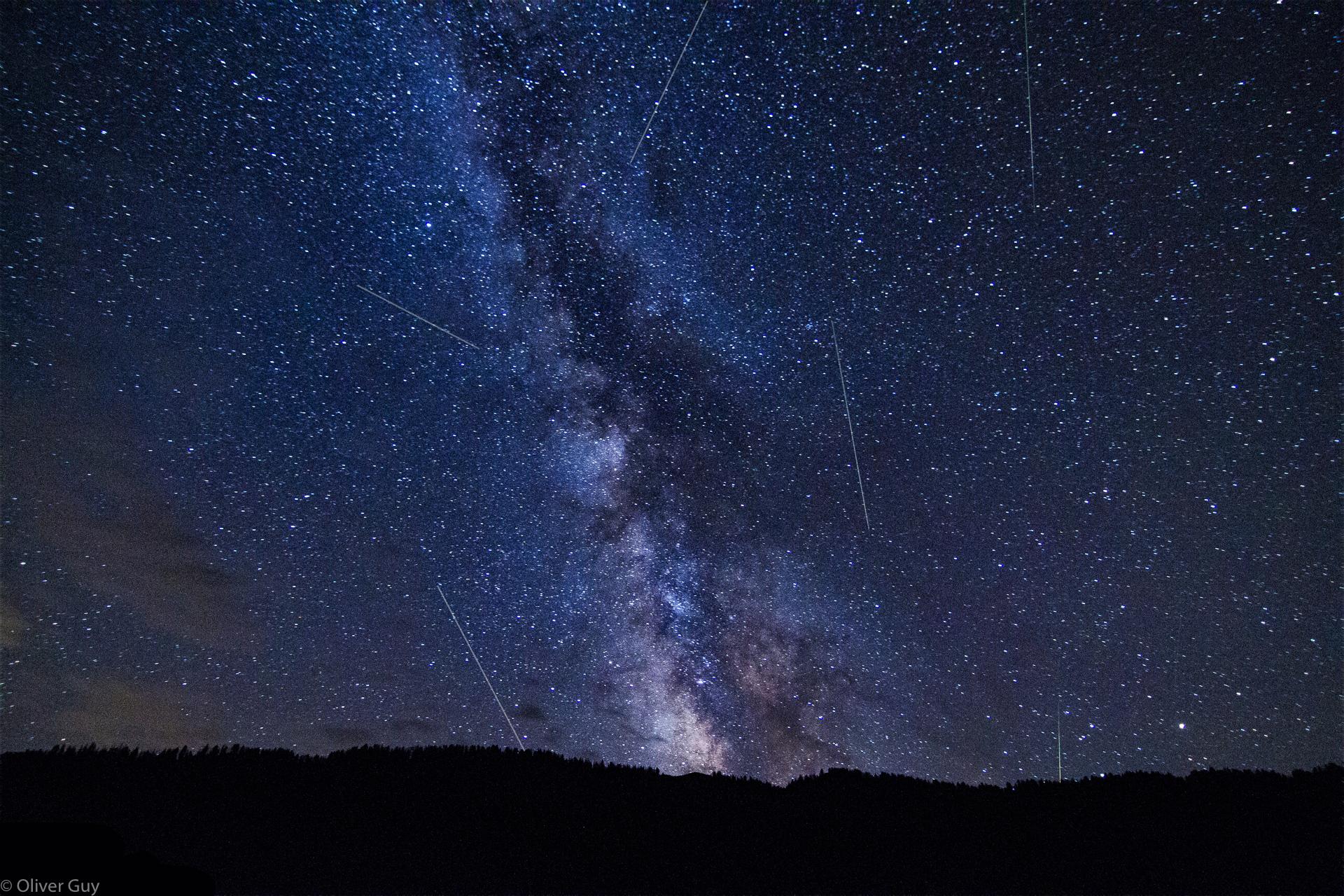 Plenty of people questioned my decision last year to fly from New York City to Salt Lake City, then to Boise, and then drive nearly three hours to Sun Valley, Idaho, all for “some stars.” But at 2 a.m., sitting on the hood of my rental car a few miles into Sawtooth National Forest, I felt like I could see the entire breadth and depth of the Milky Way. My contacts were drying out, as I couldn’t bear to close my eye for risk of missing one of the scores of meteors crossing the sky during August’s annual Perseid meteor shower. These weren’t just “some stars,” these were all of the stars (at least in the northern hemisphere).

I hadn’t picked rural Idaho out of a hat: In late 2017, the International Dark-Sky Association (IDA) named a 1,416-square-mile area in Central Idaho an official dark sky reserve. Founded in 1988, the IDA protects nighttime by fighting to keep the dark sky, well, dark. It created a sliding scale of awards, which acknowledge swaths of private and public land based on their level of legal protection and size. Now, 22 dark sky communities and more than 70 dark sky parks exist around the world—along with 10 dark sky sanctuaries, places so remote that they’re dark by proxy (like the Pitcairn Islands). The toughest designation of all is the dark sky reserve, which is reserved only for places that offer “exceptional or distinguished quality of starry nights and nocturnal environment that is specifically protected” because of its stars, the IDA reports.

Why does something like the IDA even need to exist? Nearly 99 percent of United States residents can no longer see the Milky Way because of light pollution, according to a 2016 study.

In part, the creation of the U.S. only dark sky reserve in Idaho is thanks to Dr. Stephen Pauley, an astronomy evangelist and retired ENT doctor who moved to Idaho from Southern California in the early 1990s. He learned to love the stars when he, his wife, and two kids used celestial navigation to sail from California to Hawaii—and Pauley knew when he saw Idaho’s equally stunning sky that he had to protect it.

“We got here and I noticed that light pollution was creeping in,” he says over breakfast at Sun Valley Resort. “Having sailed the Pacific and seen that beautiful night sky, I realized we really need to protect what we had here. With this many stars, even finding constellations is hard. They just melt into the Milky Way. And that’s a good problem to have.”

And so, Pauley worked as a volunteer for decades to convince local government and landowners to not only protect the sky they had, but to improve it. Ordinances across the Sawtooth National Forest and Recreation Area now limit new light sources and development, and towns in surrounding areas now have limits on types of lights and when certain areas should be lit.

Now, more than 99 percent of the land in the dark sky reserve is under light pollution regulations, including the towns of Stanley, Ketchum, and Sun Valley. The towns have laws in place to reduce outdoor lighting, re-directing it toward the ground, and requiring warmer-colored bulbs; they not only keep light pollution down, the measures also protect nocturnal animals.

While the Central Idaho Dark Sky Reserve is the only of such stature in the U.S., there are 12 other protected dark skies spread throughout New Zealand, Wales, Namibia, and more. But what about the rural areas that are just that: rural, with dark skies because of circumstance—not because of regulation or protection? The guarantee that the skies will stay dark just isn’t there.

And interest in the stars, the skies, and space is growing. University of Michigan’s Institute for Social Research found that more than 20 million adults traveled to watch the 2017 solar eclipse across the U.S. This week, the Chilean town of Coquimbo (population around 200,000) expected an influx of 400,000 visitors to watch the total solar eclipse across South America, the New York Post reports. And even more extreme, Sir Richard Branson’s Virgin Galactic has sold all of its available seats for its first tourism flights to space.

When it comes to astrotourism, more interest may be detrimental—especially in areas lacking the infrastructure for tourism, like Coquimbo, which was in the path of totality. More travelers means more cars, more headlights, more flashlights, more infrastructure built to accommodate them—and that’s bright. In Chile, in fact, the growth and installation of LED lights is affecting stargazing in the Atacama Desert, one of the darkest skies in the world. “Deterioration of the skies has increased by up to 30 percent compared to the end of the last decade,” Chilean scientist Pedro Sanhueza told Phys.org ahead of this month’s eclipse.

The IDA says that the number of parks applying to registered on its list of dark sky spots is five times as high as it was eight years ago, according to Atlas Obscura. But experts and star lovers are calling for more regulation around non-designated places, too.

“There is a massive tension between people wanting to visit these really special places, but if the special places become too easy to access or too many people go there, they lose their true nature,” says Ian Griffin, a British astronomer now based in Dunedin, New Zealand.

His solution? Regulation. “You don’t want queues of cars trying to go to the beach when there’s an aurora, for example, which has happened in places around southern New Zealand. Limiting how many people can visit may simply be the cost of making sure that these places are protected,” he says. But without the resources of an international body like the IDA, this falls on local governments—which aren’t always well prepared to convince everyone in their area to buy in to a new lighting system and infrastructure.

But seeing these stars, auroras, and planets around the world shouldn’t just be for amateur astronomers or aspiring space tourists. Astrotourism is one of the simplest (and most accessible) forms of travel—you just drive out from the city and look up. It’s meaningful for all of us, Griffin says. “I do believe that access to a dark skies is almost like a fundamental human right. It connects you with the universe. You can go to a planetarium in a city, and they can sort of simulate this stuff, but there really is nothing like it.”

While cities and towns work to protect these areas, there are things you can do, too, to keep light pollution down and enjoy the night sky responsibly. As with most outdoor activities, these reserves are remote and not monitored frequently, so think about your stargazing area like a campsite where you leave no footprint. Many reserves, like the one in Idaho, face forest fire threats, whose smoke greatly impacts your ability to see the stars—so be cognizant of burn bans and always put out fires. Be sure to leave the wildlife and flora untrampled, especially if you’re pulling over from the highway to get a better look. Watch what items you bring in and out of the area (pack out any trash) and how much light you bring in and out. To help you on the lighting front, here are a few gadgets I always go stargazing with.

A key piece of tech that astronomers use when out stargazing is a red flashlight. The red, warm light spares your natural night vision—whereas normal blue-white light will ruin it, forcing you to wait while your eyes readjust every time you switch on and off your flashlight. If you’re looking to read star charts, astrology books, or just get around in the outdoors without sacrificing your view of the stars, be sure to pick one up.
Buy now: Wayllshine High Power One Mode LED Red Flashlight, $8.99, amazon.com

While looking at your phone (a pesky source of blue light) is not recommended when stargazing, there are two apps that make enjoying and sharing your trip so much easier. The first is SkyView Lite (free), which uses GPS to show you an exact replica of the night sky, with stars, constellations, and planets all clearly marked. (You can even search for your favorites and it will direct you to where it’s located.) Plus, it has a night mode that turns everything red so you can look up at the stars and at your phone at the same time.

Now, if you’re as much of an amateur photographer as you are an amateur astronomer, be sure to download NightCap ($2.99) so you can take star photos on your phone. It handles all of the finicky long exposure settings for you with individual astronomy modes that will help you capture stars, the Northern Lights, or even star trails. You’ll want to put your phone or iPad on a sturdy surface, like the ground or the hood of a car, for the best images.

All products featured in this story are independently selected by our editors. However, when you buy something through our retail links, we may earn an affiliate commission