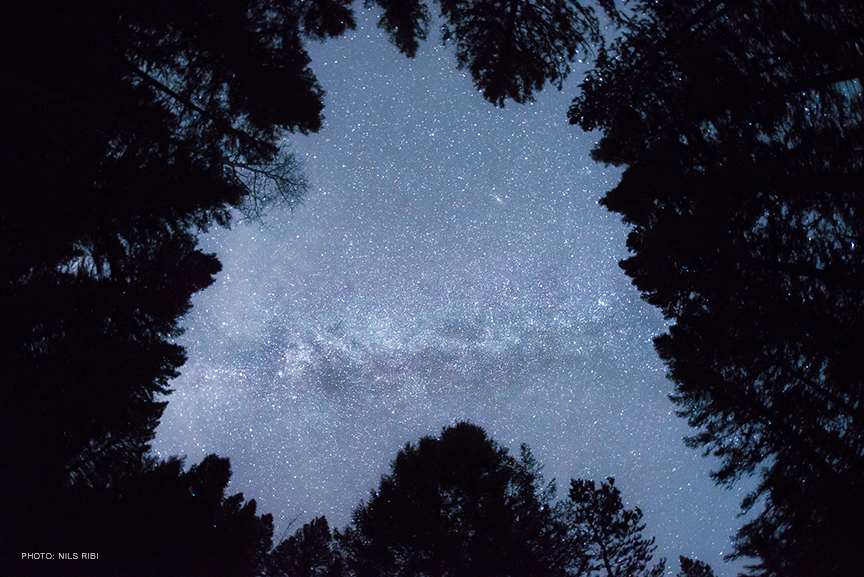 09 Nov Your Next Trip? It’s Written in the Stars – Nils Ribi Photo

Resorts, parks and attractions in the United States, Canada, Mexico and beyond are expanding the galaxy of what has become known as astrotourism.

Like watching the sunset, seeking out the Big Dipper in the night sky is a vacation ritual. But in the past five years, according to experts, the term astrotourism has evolved to describe more intentional travel to places with dark skies and more visible stars.

“Astrotourism is any kind of tourism that involves the night sky or visiting facilities related to astronomy like observatories, and combining that with a broader sense of ecotourism where interaction with nature is what the visitor experience is about,” said John Barentine, the director of public policy at the International Dark-Sky Association, a Tucson-based nonprofit organization devoted to battling light pollution and certifying dark sky preserves where stars and planets shine brightly.

Given that anyone looking up from a campfire to spot the constellation of Orion could be considered a stargazer, their numbers are hard to quantify, but anecdotal evidence suggests the pastime has a growing fan base.

In March, the public library in Rancho Mirage, Calif., opened an observatory with a 23.5-foot dome as well as a 2,000-square foot patio where visitors can attend stargazing events. In June, Viking Ocean Cruises launched its new ship, the Viking Orion, featuring a planetarium and a resident astronomer who offers lectures, guided stargazing and indoor night-sky tours.

The National Park Service has adapted its slogan “Find your park” to “Find your park after dark” to increase awareness of its night sky programs, which include star parties, festivals, interpretive talks and children’s night explorer programs.

Eclipse pilgrims chasing the path of the 2017 solar eclipse caused traffic jams along the path of totality last August, and destinations from Texas to Maine are already gearing up for a similar migration when the next North American eclipse takes place April 8, 2024. Visitors to South America won’t have to wait that long; on July 2, 2019, one will track across Chile and Argentina.

“The eclipse last summer raised so much awareness — people got really jazzed about looking up from that,” said Samuel Singer, the owner of Wyoming Stargazing who guides public and private stargazing in Jackson Hole and Grand Teton National Park. Founded in 2014, the company has grown from one high-powered telescope to 10 to meet demand.

“In every culture there’s a myth about the stars and stories there,” he added. “People have always looked up for answers.”

Many of the best stargazing areas in North America lie near popular mountain resorts, ski destinations and state and national parks, adding a cosmic wonder to trips there; along with stargazing events and festivals, they are expanding the galaxy of astrotourism.

Ketchum and Stanley are both gateways to the reserve. The Sawtooth Botanical Garden in Ketchum and the Stanley Museum both offer periodic astronomy programs. Idaho Conservation League has held overnight treks in the reserve.

Walkway Over the Hudson, the bridge-turned-linear-park between Poughkeepsie and Lloyd on either side of New York’s Hudson River, has added Starwalks this summer, deploying scientists and teachers along the span to talk about special themes, offer nighttime photography tips and staff the telescopes (free).

Gatherings of stargazers abound, from star parties in state parks to weeklong star safaris in Australia. The online magazine AmSky.com lists global cosmic gatherings. The province of Alberta, Canada, is home to six Dark Sky Preserves. One of the world’s largest, the 4,200-square-mile Jasper Dark Sky Preserve in the Canadian Rockies offers prime stargazing and Northern Lights watches September to May, including ski season. From Oct. 12 to 21, the Jasper Dark Sky Festival will feature the astronauts and brothers Scott Kelly and Mark Kelly as speakers, in addition to sessions on night photography, telescope tours and stargazing.

For those seeking to take better photos of the night sky, the fourth annual Astrophotography Conference at the Adirondack Public Observatory in Tupper Lake, N.Y., Oct. 11 to 14, will focus on dark sky photography workshops (fee $150).

Resorts like the Hyatt Regency Maui Resort and Spa in Hawaii, with three high-powered telescopes on its roof capable of spotting 80 constellations, and Primland in Virginia’s Blue Ridge Mountains, home to its own observatory, have set a high bar for casual astronomy. But even the less equipped are bringing science to night life.

In Mexico, the Four Seasons Punta Mita has recently begun offering complimentary stargazing on its driving range where a guide uses a laser to point out stars and constellations overhead (rooms from $695). Private stargazing tours may take place at the beach and include wine and cheese (from $70 per person). Guests of Westin Grand Cayman Seven Mile Beach Resort & Spa in the Caribbean can newly reserve an oceanfront beach cabana at night in a stargazing upgrade ($45 per person) that include a private firepit with s’more fixings, telescope, night sky map and dinner (rooms from $299). In Sedona, Ariz., L’Auberge de Sedona Resort & Spa has added complimentary “star bathing,” an adaptation of forest bathing, the Japanese concept of meditation in nature (rooms from $399). The guided nighttime version has participants appreciate all that is around them, as well as twinkling overhead.